The Kingdom of Eti-Oni located in Sub-Sahara West Africa in Osun State, Nigeria glorified as the oldest cocoa plantation in Nigeria is launched the global film festivals during “The Cocoa Festival” now in its 8th edition. The historic event also plans to tackle the emerging entertainment market place since COVID-19 and the impact of “films of purpose,” and trends of New Age Technology that have ushered in a New World and system of how the arts & entertainment will be sustainable. Creating a historic and innovative platform has garnished the dedicated support from key entertainment decision makers and stakeholders internationally.

The Kingdom of Eti-Oni is the first Kingdom to found global film festivals by a Monarchy, and also makes history as the first ever film festival to celebrate cocoa. Royal Cocoa International Film Festivals (RCIFF) presented by Eti-Oni Development Group will launch during 8th annual edition of “The Cocoa Festival” and will host a series of hybrid and physical film events that include private workshops for film and television. Royal Cocoa International Film Festivals (RCIFF) was founded by Their Royal Majesties of Eti-Oni, King Dokun Thompson Gureje IV and Queen Angelique-Monet Gureje-Thompson during the annual New Generation In Action Artisan Festival International World Peace Initiative’s World Peace & Tolerance Program on July 13, 2021, in Cannes, France as the organization continued 9 years of presence during Cannes Film Festival despite the pandemic.  Since the inception, the unique festival (RCIFF) has partnered with New Generation In Action’s (NGIA) Artisan Festival International (AFI) World Peace Initiative, an award winning NGO recognized with Consultative Status by the United Nations through Economic and Social Council. NGIA has used diversity of media platforms to promote RESPECT and DINITY across the broad spectrum of society regardless of gender, race, and ethnicity, or religion.

Eti-Oni Development Group has a global perspective and a long term objective to transform the rural cocoa producing community of Eti-Oni into a sustainable model smart town. It is made up of several accomplished individuals with diverse skills and experiences both locally and internationally who are visionary, creative and focused with the commitment and passion to achieve the group’s objectives.

According to the United Nations, Nigeria is poised to be the 3rd most populous country in the world by 2050 and there is a pressing need to creatively develop rural communities through different people and private initiatives and enterprises without relying on government intervention as a means to accommodate this rising population and new ways of generating the investments to fund the required social services and physical infrastructure.

NGIA/AFI has been utilizing the diversity of media platforms to promote RESPECT and DIGNITY across the broad spectrum of global society regardless of gender, race, ethnicity, or religion. With its AFI World Peace Initiative, the NGIA has chosen film as an impactful means to educate, enlighten and inform audiences of all ages around the world, with a better understanding of the existential issues facing us all today. 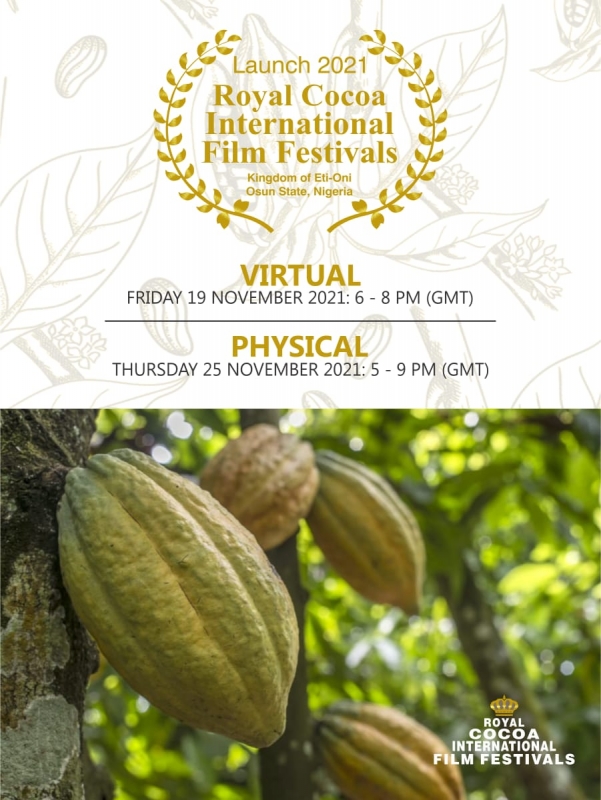 ABOUT THE COCOA FESTIVAL

HRM Queen Angelique-Monet, President of Eti-Oni Development Group stated that The Cocoa Festival was a celebration of the cultural heritage of Eti-Oni now in its 8th edition and also celebrating 125 years of continued production of cocoa in Eti-Oni. She said the main objective of The Cocoa Festival was to create a renaissance in the cocoa industry in a manner that will first appreciate the farmers, return dignity and self-worth to the farmers so that the coming generation can embrace cocoa farming with pride. She said further that the group’s approach was through creating a cocoa culture and building platforms for cultural exchange, networking, exchange of ideas and opportunities for networking that will lead to establishing collaborations and partnerships to bridge the gap between cocoa production and consumption and ultimately achieve mutual and beneficial shared value to create wealth that can transform producing communities. It was reported that over the years, the festival has seen in attendance agriculturalists (new and established), agro-tourists as well as local and international travel enthusiasts who go to participate in somewhat divine and significant royal cocoa traditions of Eti-Oni showcased through music, dance, drama and poetry amongst other events through the entire week of celebration.

The Launch of (RCIFF) in Nigeria will be a hybrid of virtual and physical events to give opportunity to several global stakeholders and decision makers who had been providing advice and support to make the festival, a truly international one but due to covid, most people who had shown keen interest to be part of the festival and the historic launch of the film festivals are still limited in international travels.

Details of the Virtual Launch:

Details of the Physical Launch:

The launch will screen one feature film and 4 short films:

Discussion in the New World & New Generation of Entertainment.

•       Breaking into the global Film Industry – Micro-budget to Blockbuster, is there a formula? Experts will advise based on The New World of entertainment  since the pandemic 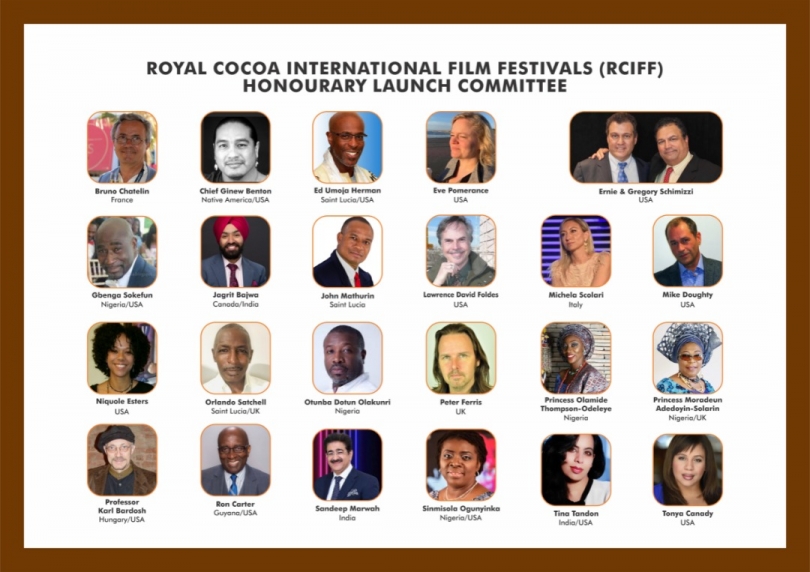 The Honorary RCIFF Launch Committee is a group of individuals who are stakeholders and decision makers in the global film industry that have provided support specific to “films of purpose,” and the launch of RCIFF within the arts sectors: In alphabetical order, they include: 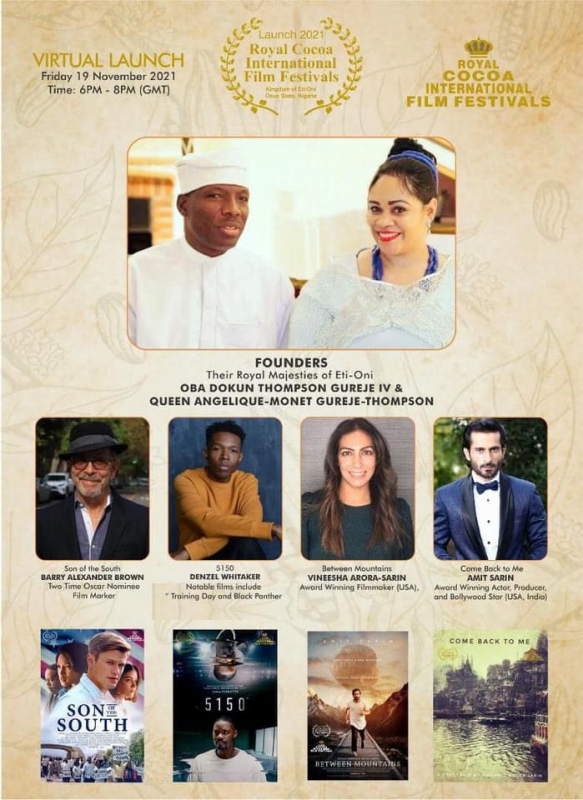 5150 – Denzel Whitaker –  Notable films include “The Great Debaters, Training Day, and Black Panther as well as TV Shows ER, Brothers and Sisters and The War at Home.

Eti-Oni Cocoa Events of Eti-Oni Development Group has continued to be innovative in cocoa culture creation and the bringing together of peoples and cultures. In April 2022, Eko Chocolate Show, the biggest show dedicated to chocolate and confectionery will hold its 3rd edition. Alongside the show will be the 2nd edition of the Nigerian Cocoa Awards. The award which debuted in 2017 is given in recognition and appreciation of excellent and outstanding contribution to Cocoa Development and Sustainability to individuals, corporate organizations or government agencies or programmes from around the world.

HRM Queen Angelique-Monet also made an official announcement of the maiden edition of the much talked about International Cocoa Festival to be held between the 25th and 29th May 2022 at Soufriere, St Lucia alongside the St Lucia series of the Royal Cocoa International Film Festivals. It was said plans were being finalized to create a global stage in St Lucia for cocoa that will not only celebrate the best of the Caribbean region but also begin the development and deepening of the connection with Africa as the motherland and everyone especially cocoa and chocolate lovers from all the corners of the world were invited to join the celebration in St Lucia in May 2022. The Festival has been themed: “The Coming Together”

In her final remarks, Queen Angelique-Monet said that the Royal Cocoa Festival Dinner London now in its 5th edition had continued to grow and participants had been building on the opportunities the event offered through partnership with several organizations like the Academy of Chocolate UK who had participated in every edition of the Dinner. Her Royal Majesty mentioned that the last 2 editions were done virtually again due to covid but plans were underway to expand the offerings with more interesting activities to be launched during the 6th edition in October 2022.