The Kingdom of Eti-Oni, Osun State, Nigeria – Announces the launch of the Royal Cocoa International Film Festival (RCIFF) during its eighth edition of The Cocoa Festival. This historic event brings entertainment into its historic and innovative platform, while Cocoa Festival celebrations are already underway at the oldest cocoa plantation in Nigeria. The 8th Annual Cocoa Festival is preparing to hold its first film screenings at 6:00 PM on Thursday, November 25th, 2021. 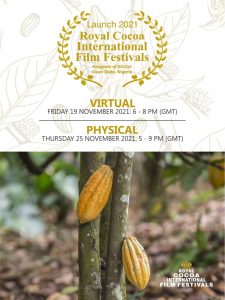 The Kingdom of Eti-Oni is in Sub-Sahara West Africa in Osun State, Nigeria. The King and Queen have dedicated their support to and the growth of their kingdom by transforming the cocoa industry through sustainability. This commitment is now also extended to the modern development of media into Nigeria’s emerging marketplace.

Royal Cocoa International Film Festival (RCIFF) was founded by Their Royal Majesties of Eti-Oni, King Dokun Thompson Gureje IV and Queen Angelique-Monet Gureje-Thompson. This year’s event makes history for the Kingdom of Eti-Oni as the first monarchy to launch a film festival in support of the cocoa industry. RCIFF is presented by the Eti-Oni Development Group during its 8th annual Cocoa Festival.

To achieve this unique festival, RCIFF partnered with Artisan Festival International (AFI) World Peace Initiative, which holds consultative status by the United Nations Economic and Social Council. The organization continues its 10-year presence by celebrating the arts through film festivals by awarding the film industry for its contributions to world peace.

Royal Cocoa International Film Festival (RCIFF) will be hosting a series film events that include screenings previously selected by the AFI World Peace Initiative’s “Films of Purpose” agenda. Additionally, it is holding private workshops for film and television by the support of key entertainment decision makers and stakeholders internationally.

The event will include screening premieres of:

The launch will screen one feature film and 4 short films:

Eti-Oni Development Group has a global perspective and a long-term objective to transform the rural cocoa producing community of Eti-Oni into a sustainable model smart town. It is made up of several accomplished individuals with diverse skills and experiences both locally and internationally who are visionary, creative, and focused with the commitment and passion to achieve the group’s objectives.

New Generation In Action (NGIA) Artisan Festival International (AFI) World Peace Initiative is an award winning US based NGO, recognized with Special Consultative Status by the United Nations through ECOSOC founded by HRM Queen Angelique-Monet Gureje-Thompson of Eti-Oni, Osun State, Nigeria. NGIA/AFI has been utilizing the diversity of media platforms to promote RESPECT and DIGNITY across the broad spectrum of global society regardless of gender, race, ethnicity, or religion.

ABOUT THE COCOA FESTIVAL

HRM Queen Angelique-Monet, President of Eti-Oni Development Group stated that The Cocoa Festival was a celebration of the cultural heritage of Eti-Oni now in its 8th edition and celebrating 125 years of continued production of cocoa in Eti-Oni. She said, “The main objective of The Cocoa Festival was to create a renaissance in the cocoa industry in a manner that will first appreciate the farmers, return dignity and self-worth to the farmers so that the coming generation can embrace cocoa farming with pride.” Queen Angelique-Monet continues by saying, “That the group’s approach was through creating a cocoa culture and building platforms for cultural exchange, networking, exchange of ideas and opportunities for networking that will lead to establishing collaborations and partnerships to bridge the gap between cocoa production and consumption. This ultimately helps to achieve mutual and beneficial shared value to create wealth that can transform producing communities.”

The Embrace Award by Ceramiche Noi is reconfirmed in Cannes